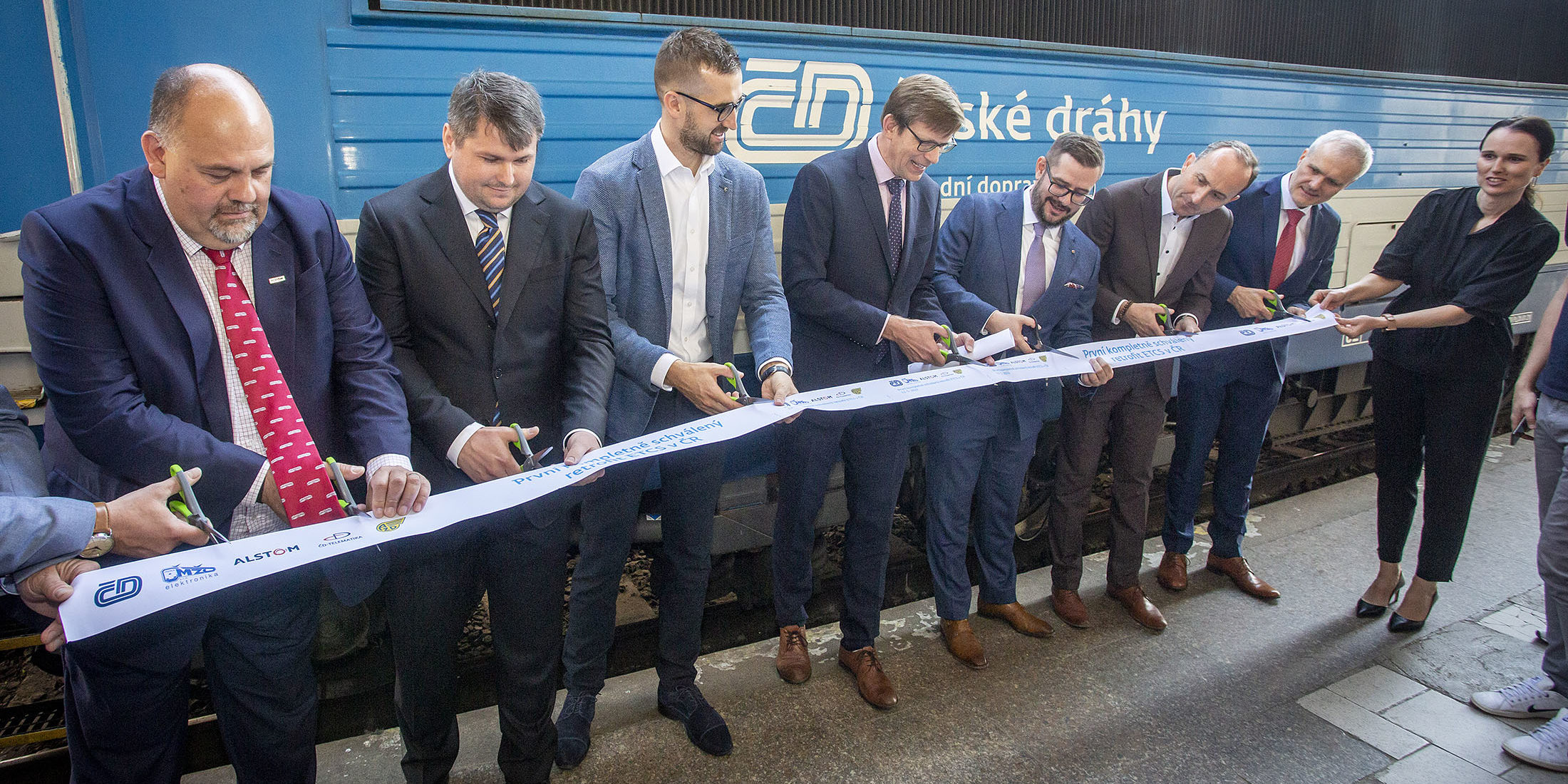 Representatives of the supplier association led by ČD – Telematika together with AŽD Praha today ceremoniously handed over to České dráhy, a.s. (JSC) the first vehicle retrofitted with the on-board unit of the European train control system ETCS, which can be put into sharp commercial operation. The significance of this ceremony was underlined by the participation of the Minister of Transport Martin Kupka. The prototype vehicle of the 362 WTB series owned by České dráhy received from the Rail Authority the final approval of the vehicle type and its placing on the market. This authorization means that the vehicle is fully capable of sharp commercial operation under ETCS on the domestic rail network, ie in the so-called Switch-On mode.

“The deployment of ETCS is one of the important steps in strengthening railway safety, not only in our country but throughout Europe. We have already equipped several hundred kilometers of our lines with this unified technology and we continue so that we can start the exclusive operation of ETCS on the corridors in 2025, ” says Minister of Transport Martin Kupka. “We are aware of the financial demands of implementing ETCS, and therefore we intend to continue to use financial assistance from the European Union, in addition to national resources, which will allow us to better manage the implementation of the system,” the minister continues.

“Today’s ceremony is in a way a symbolic embodiment of the turning point of Czech rail transport,” says Tomáš Businský, Member of the Board of Directors and Director of Telecommunications and Infrastructure Services at ČD – Telematika, who today handed over the vehicle to Michal Krapinec, Chairman of the Board and CEO of České dráhy. “Retrofitting existing vehicles with ETCS, so-called retrofit, is the most common way for domestic rail carriers to address the need to implement this pan-European safety system. With the approaching date of the introduction of exclusive operation under ETCS on selected corridor lines on 1 January 2025, the demand for the implementation of this system in operating vehicles is growing, but also the time pressure for such implementations. We are extremely pleased to be at the forefront of the retrofit segment and in the last few weeks we have won two other major contracts for the national carrier, namely the retrofitting of the popular Pendolino units (series 680) and the CityElefant units (series 471) with the ETCS system,” adds Businský. “We are pleased to be able to participate in the supply of these modern safety systems for traction vehicles for the České dráhy with our own technologies, and in cooperation with a foreign partner we can install a comprehensive ETCS system. I believe that by the decisive date of January 1, 2025, a sufficient number of vehicles will be equipped with ETCS so that the exclusive operation of trains according to the National Implementation Plan approved by the Ministry of Transport of the Czech Republic can be initiated,” said Zdeněk Chrdle, CEO of AŽD Praha. Petr Faltus, Sales Director, attended the ceremony on behalf of the company.

“The date of exclusive operation under the supervision of the European train control system ETCS is fast approaching and the company České dráhy is, of course, preparing for it. Evidence of this is today’s ceremonial takeover of the first locomotive retrofitted with the ETCS on-board unit, which is also fully approved and ready for routine operation. At present, we have contracted for the delivery of ETCS for more than 400 current vehicles, so-called retrofits, also we have concluded contracts and binding orders for 246 completely new vehicles, which will be delivered from production already equipped with ETCS,” says Michal Krapinec, Chairman of the Board and CEO of České dráhy, a.s., and adds: “We have also started trainings of hundreds of train drivers and in the second half of this year we will start operating the first trains under the supervision of ETCS. In České dráhy, we are thus taking all steps to enable us to smoothly switch to exclusive operation under the supervision of ETCS on selected corridors on 1 January 2025.”

“We are pleased that the first retrofit of the vehicle, which can now operate in the domestic railway network in the so-called Switch-On mode, was approved and put into operation,” says Radek Šafránek, Director of the Operations and Technical Section of the Rail Authority, adding: “This year, we anticipate that more than 400 vehicles retrofitted with ETCS will pass the approval process. The main goal we are pursuing together with the European Railway Agency is to increase railway safety. Therefore, we are also striving to introduce mandatory training for train drivers on simulators, which will be incorporated into the National ERTMS Implementation Plan.”

The specific prototype vehicle 362 165-3 already in the middle of 2021 successfully passed the compatibility tests of the track and on-board part of ETCS in the Czech Republic and then received the necessary certificates of conformity and safety assessment. Other series locomotives of the 362 WTB series can already be approved for commercial operation under ETCS in a much simpler way without the need to provide a complete set of documentation numbering more than a hundred documents.

Based on the results of the public contract, the supplier association ČD – Telematika and AŽD Praha signed a framework agreement with České dráhy in 2019 for equipping up to 131 electric vehicles with the ETCS system. With the intentions of the framework agreement, a binding contract was signed for equipping 102 traction vehicles of the national carrier series 162 WTB, 362 and 362 WTB with an ETCS system with a total value of almost CZK 1.4 billion. The successfully completed retrofit of the 362 WTB prototype vehicle is a significant milestone in the fulfillment of this binding contract. ALSTOM Belgium and ČMŽO – elektronika also participate in the supply and installation of ETCS.